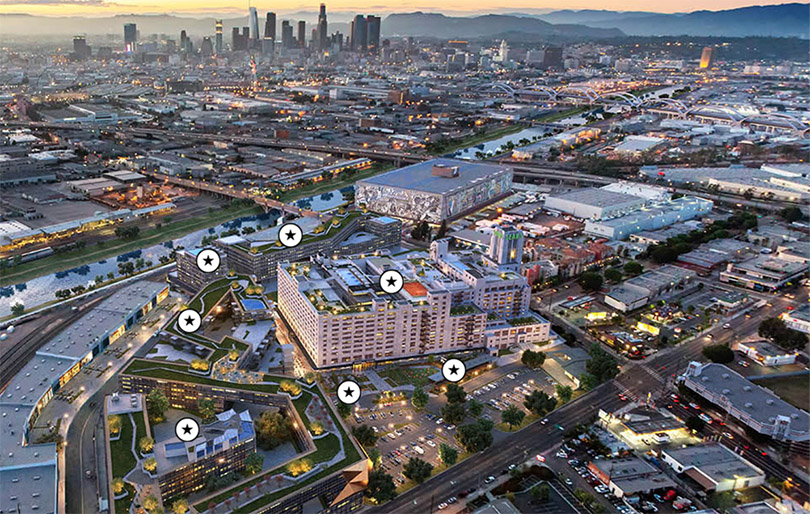 The Sears Mail Order District is a major new development in Downtown Los Angeles by the Shomof Group.

Encompassing the historic Sears distribution facility and the surrounding 25 acres, The Mail Order District (MOD) is a visionary project that reactivates this architectural icon. Flux Branding was selected to develop an authentic brand that integrates the building and its history under a unique patriotic position.

The name “Mail Order District” was selected to honor the original purpose of the 1.8 million square-foot facility. To support the success of the Sears Catalog mail order business, the LA Sears Building was part of a national network of similar warehouses that fulfilled the goods America wanted most.

Developer Izek Shomof, who purchased the building in 2013, has announced plans to convert the historic landmark and its surrounding property into a multi-use development featuring office space, apartments and pedestrian-oriented shops and restaurants.

According to plans filed with the City of Los Angeles, the project would include:

The existing Sears department store which occupies a portion of the building’s first and second levels would be left in place.  The remaining space would be repurposed as shops and restaurants, including a food market featuring over 50 vendors.  The proposed office space would be located on a new mezzanine level on the second floor, as well as on the building’s third story.

The 4th-through-10th floors of the Sears building would be converted into live-work apartments.  Residents would be served by amenities on the roof level, including community rooms, a gym, multiple swimming pools and athletic courts.  These facilities would also be made available to employees of the building’s office employees.

Other proposed features along the building’s rooftop include restaurant and event space, which would be located along the base of the iconic tower.

On the upper levels, plans call for a mixture of commercial space and live-work lofts.  The 13th floor would offer a collection of shops and restaurants.  The 14th through 17th levels, located within the tower, would serve as one live/work loft to avoid increasing the building’s total floor-area ratio.