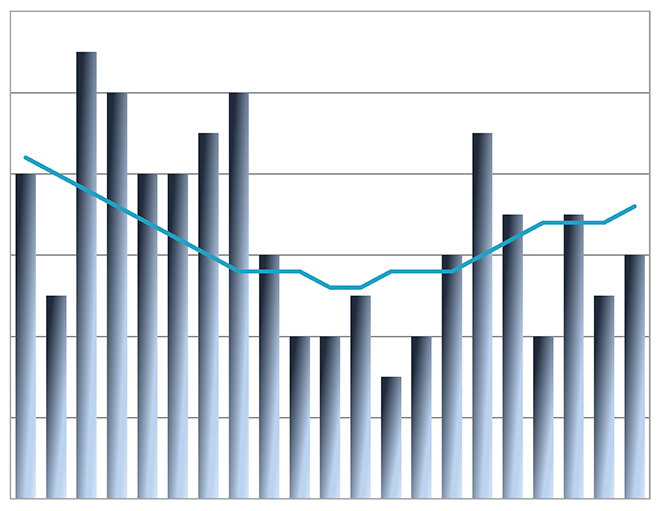 In 1991, I sold fifteen buildings in the Downtown Los Angeles market. In 1992 I did not sell one! The market had collapsed. The years of the junk bonds and Resolution Trust (RTC) hit the economy like a lightning bolt. Downtown LA saw 90% industrial vacancies, and a devaluation of property values by 70-90%. Major Properties survived those years by owning real estate with little debt, and we had a lucrative contract with the United States Post Office for all of California as an independent contractor. The market was soft and depressed until 1998.

The next cycle took us on a bull run from 1998 until October 2008 when again, the real estate market fell off a cliff. The housing bubble hit commercial real estate hard. But unlike the 1990’s, this cycle did a boomerang for our market in Downtown LA and we were back and doing deals again in October 2009. The vacancy rate going in at October 2008 was 4% and coming out in October 2009 was 5%. Not much of a hit, physically, but the value of those properties dropped 50%. It was a total economic reset.

So, we now find ourselves at a crossroads after the 2009 through 2020 cycle (a cycle that I coined the “Supercycle”). I said it would take a terrorist attack in the Port of Los Angeles, a magnitude 10 earthquake, or an act of God, to stop the booming Los Angeles economy. With new construction highlighted by SoFi Stadium in Inglewood (the new home of the Rams and Chargers) and the The Lucas Museum of Narrative Art at USC, a 2022 Super Bowl and a 2028 Summer Olympics, Los Angeles was on a straight course to be the next Rome of this century.

This Covid-19 crisis is hitting the markets hard. Should we get back to work, even partially, with precautions of no hand shaking, etc., we could recover quickly. However, should this be a prolonged downtime, say more than through the month of April, then we most likely will see a strong hit to values and occupancy. Right now, three weeks into the crisis, interest continues in property and lenders are still willing to do deals. Major Properties has recorded a few deals and we have requests for showings still going on.

Each cycle has its own cause and effect on the market. This market is not the same as in 1990 or 2008, and the ultimate effects will be based upon people’s reactions. Calm remains the word of the times. The one thing we know about Los Angeles, after each downturn the market recovers and surpasses the past highs.

I remember driving to the office on a Monday when the Stock Market was crashing. People in the office were in an outright panic. But I remember that as I drove into the office on Olympic Blvd., the streets were packed with people driving, shopping, and living. The buildings were still there and being occupied. I knew that this was a false panic and conditions beyond anyone’s control had affected the markets. I also knew that the market would recover and normalcy would return.

It is hard to stay calm when we are faced with challenges that are beyond our imagination. But then I turn to faith. I have faith that good will prevail. Like so many times before, we will be back bigger and better than before.

Major Properties Network Getting it Done!