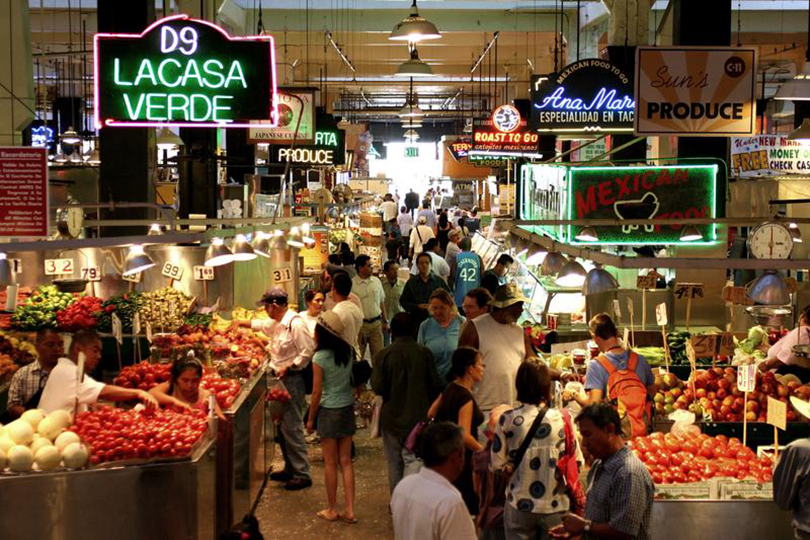 The Los Angeles Times has reported that the bustling Grand Central Market, one of Los Angeles’ best-known cultural landmarks, has been sold to a Beverly Hills real estate investor who vows to preserve its historic charms.

The sale that closed Tuesday included the 12-story Million Dollar Theater tower next door, home to the first movie palace opened by entrepreneur Sid Grauman, who went on to create the famous Chinese and Egyptian theaters in Hollywood.

Grand Central Market, which celebrated its 100th anniversary last week, is a popular destination for locals and tourists who can choose a meal from dozens of food stalls or shop for produce, spices and other wares. It is open every day and draws 2 million visitors annually through its wide doors on Broadway and Hill Street.

“We just want to safeguard this place,” said new owner Adam Daneshgar, president of Langdon Street Capital. “We are not looking to go in and change or overhaul anything.”

Daneshgar declined to disclose how much his firm paid for the buildings. They had been owned since the mid-1980s by the Yellin Co., founded by the late Ira Yellin, an early pioneer of the downtown renaissance.

Daneshgar said he would spend “several million” dollars on maintenance and what he called “surgical” improvements such as painting the walls, cleaning the dusty skylights and updating the lighting. He said he may add one or two more stalls to the 40 existing ones.

The current tenants reflect both the market’s recent past as a place to buy inexpensive produce and hog maw tacos and its evolution to a more gentrified food hall selling pressed juice, artisan bread and craft beer.

Among the eateries is Chinese food purveyor China Cafe, which has been there since the 1950s, and well-reviewed new food stalls Wexler’s Deli and Sari Sari Store, which sells Filipino food made by a James Beard Award nominee.

“It’s a unique marketplace where you don’t just go to eat,” Daneshgar said. “You go there because it is an experience and you want to do something different, to soak it all in.”

The Million Dollar Theater, closed for years and last used as a church, will be reactivated by an undisclosed new tenant that will also control the building’s empty shops on Broadway.

For Daneshgar, 34, the acquisition of the market and theater buildings, which have a combined 400,000 square feet of space, marks a high-profile deal for a real estate investor with a low local profile.

He completed USC’s graduate-level real estate development program less than a decade ago and in 2011 began investing in properties that had been depressed in value by the recession. Daneshgar acquired apartment buildings in Las Vegas and moved on to buy retail, residential and office properties in California, New York and Texas.

“It’s put us in a position to pursue opportunities aggressively,” he said.

Daneshgar said he heard that Grand Central Market might be available and wrote a letter to Adele Yellin proclaiming his interest. It was, in real estate parlance, an unsolicited offer.

“She saw my passion and love for the project,” he said. “I assured her that our vision was aligned with hers and Ira’s.”

Ira Yellin was a pioneer of the current downtown renaissance. In the mid-1980s, Yellin, a lawyer with an academic interest in urban planning and historical preservation, bought not only the Grand Central Market but also the Million Dollar Theater and the Bradbury Building across Broadway.

All of them were landmarks in disrepair in a neighborhood that had grown disreputable, said Dan Rosenfeld, one of Ira Yellin’s former partners. Yellin spent millions of dollars to restore them at a time when other serious developers were building office skyscrapers on Bunker Hill and wanted nothing to do with Broadway.

“Ira put his money and his life on the line to start the cultural revitalization of downtown with some of the most significant and most challenging buildings,” Rosenfeld said. “He had a realization that something could happen in the heart of what we now call the Historic Core.”

Martin Beck of Major Properties Has Closed a Multi-Family Deal for $4,250,000