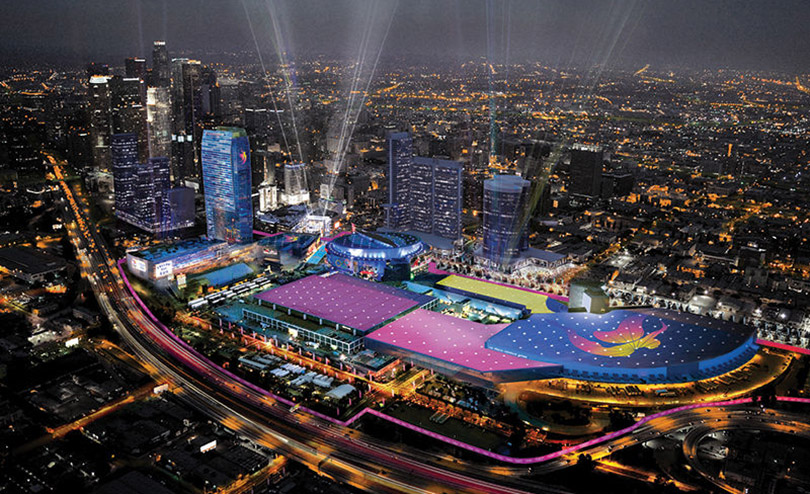 On August 11th, the Los Angeles City Council voted in favor of having the city sign a contract with the International Olympic Committee and the city of Paris to bring the 2028 Summer Games to Los Angeles, four years after the Games take place in France. At this point the IOC’s vote to approve the awarding of two games at once, scheduled for Sept. 13 in Lima, Peru, seems a formality.

If everything goes as anticipated, the third Los Angeles Olympics will take place July 21-Aug. 6, 2028. While the eyes of the world will be on the entire region, Downtown Los Angeles will claim the highest perch on the athletic podium. That’s because a whopping 16 Olympic events will take place in the area.

So what will the Central City look like for those 17 days, as well as the weeks before the Games, and during the Paralympics that take place roughly two weeks later? Expect huge crowds, packed hotels and a massive security infrastructure.

The city won the Olympics on a bid built around using existing venues, without the need to construct the budget-busting stadiums and arenas required for past Games. The Los Angeles Games and related festivities will be based on that relatively modest approach, according to LA2028 CEO Gene Sykes.

The overall plan involves four “sports parks,” which are clustered zones of activities and event infrastructure. The most prominent of those is in Downtown (others are Long Beach, the South Bay and the San Fernando Valley). Local venues include Staples Center, the Convention Center — which will host numerous sports — and the Coliseum and other facilities in Exposition Park.

“Downtown is at the heart of our Olympics plan,” Sykes said.

Crowds will throng Downtown for an array of events. The Convention Center will hold everything from boxing and taekwondo to table tennis and fencing, all set up in temporary competition areas.

The activity extends to L.A. Live. The Microsoft Theater will be home to weightlifting events, while Staples Center will host the basketball finals.

The Figueroa Corridor will be activated with a series of live entertainment and art exhibits. This will carry the momentum south to the University of Southern California and Exposition Park.

The Olympics will utilize the Los Angeles Memorial Coliseum for track and field events, as well as the closing ceremonies. USC’s Galen Center will hold karate, while the university’s Dedaeux Field will be home to the popular swimming and diving competitions.

One of the newer venues will be Banc of California Stadium in Exposition Park, which will serve as the upcoming home for the Los Angeles Football Club; it is scheduled to open in 2018. During the Olympics, it will host some soccer games.

Other parts of Downtown will be also be activated for Olympic events. That includes Grand Park in front of City Hall, which will serve as the starting point for the marathon.

The new USC Village will be the media headquarters for the thousands of national and international journalists who will come to town to cover the Games.