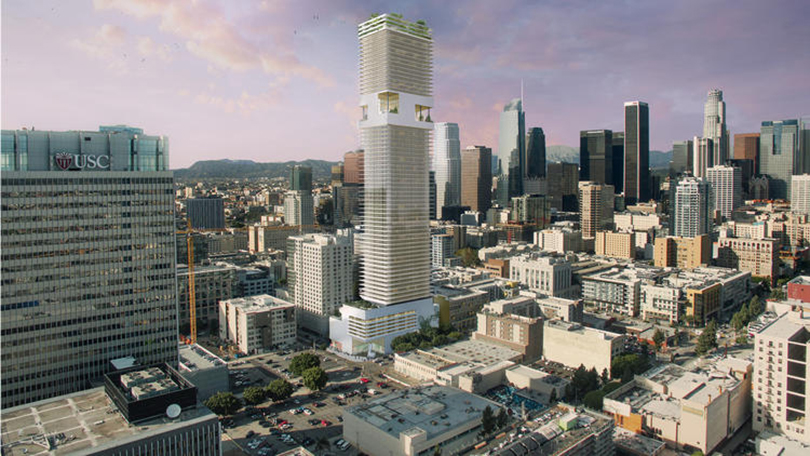 The Los Angeles Times has reported that a skyscraper that would be the tallest residential building in California has been proposed for Downtown Los Angeles.

Crescent Heights, a Miami-based developer, submitted a proposal to the city Planning Department this week to build a 70-story apartment building that would stand out in size and design amid the rapidly growing South Park district east of Staples Center.

The 810-foot building with 794 units would be the third-tallest in Los Angeles behind the recently opened Wilshire Grand hotel and office tower and the U.S. Bank Tower office building completed in 1989.

The plan for 1045 S. Olive St. calls for eye-catching cutouts two-thirds of the way up the building that would hold a swimming pool, lounge and gym.

Greenery would be found on the balconies that surround the units and on the landscaped outdoor rooftop lounge. The developers hope to plant more than 200 trees on lower-level decks and other parts of the building.

Crescent Heights is just beginning the city approval process, which is expected to take about 18 months, said land use attorney Sara J. Hernandez of law firm Liner, which represents the developer.

If the city approves the $300-million project, it would take about three years to complete construction. The almost five-year timeline would push its arrival well past other big — but not as tall — residential developments under construction downtown, which some market observers fear may become overbuilt in the near future.

Thousands of residential units have recently been erected in South Park and many more are under construction, including the Oceanwide complex on Figueroa Street with 500 condos, the 648-unit Circa apartment towers nearby and Onni Group’s 730 units at 1212 S. Flower St.

“I think there are going to be corrections in the market short term,” said downtown booster Jessica Lall, “but overall we need housing units and we were underbuilt.”

“Downtown is still the safest and best bet for developers to make their investment” pay off, she said.